Connect and share knowledge within a single location that is structured and easy to search.

One day I came to the QA stackexchange community from SO and what I noticed after certain time has passed that (except of the QA community is less agile than SO) people here ignore voting the questions. I couldn't get rid of this feeling and I tried to do some rough assessment. I took the most popular tag here and there and watched the "newest" questions which are of 1 week or of older age.

My sample was of about 100 items size (again this is far not representative but nevertheless) and what I got is that questions having zero votes in SO surprisingly fell in a close range to zero-voted questions in QA. However down-voted questions in SO take approximately 3 times bigger part than they take here in QA.

I believe down-voting is potentially quite a powerful mechanism of making the content better because often people don't even care of the basic formatting in their questions or just drop lines of code without any description. However I can see that people here use it very rarely. Is it considered a sort of bad manners in the community or there are some other reasons?

Beside plain statistics and comparison with SO (or other places), you need to consider human factor in this calculations. This community by itself is more closed and do not attract all people here by default (as SO), most or almost every participant here has at least have some general knowledge about how this site works, what to avoid and considering this fact, in start you have more cleaner environment.

When you insert in this case that people here are more topic specific than SO, you have a better idea about the scope how things are running. Now insert into that picture that majority of questions are Selenium (or automated testing) related and you will get even better picture when you consider that in missing piece you fit in other participants that are manual tester.

In all that mix, consider that questions here are mostly specific issues that people encounter and answer to those questions tend not to be very wide in response, you get the idea why isn't it more polarized. Very small amount of questions are opinion based and if you look for some most voted/viewed question you can see that those question attract majority of people to participate and bring those votes into counting, on the opposite end question with most minus votes are closed rather quickly because they are duplicated, too broad, unclear and you can see why there is not much room for people to play with down votes in general.

So I went straight to the source: the StackExchange Data Explorer and ran the following two queries on a random-ish sample of sites (off the top of my head ... truly random seemed like a lot of work...) Note that this is all public data.

And I got the following results 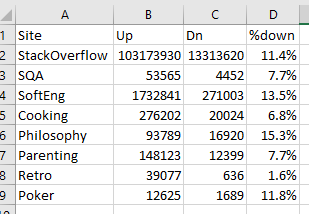 So I would say we're on the lower end of downvote usage, but definitely not orders of magnitude different than other sites. The highest on this list is barely double our downvote ratio, and I was incredibly shocked at Retrocomputing (I thought I had missed a decimal place!!)

So according to your profile you're at 102/(102+37) = 73.4% downvotes. That is astonishingly high! Using this query, I'm able to find that there are less than 1100 people on Stack Overflow (which has millions of users) that have one that high.

That doesn't mean you're doing anything wrong, or anything bad. It just means that what you do is not typical of either SQA or even Stack Exchange in general, but that SQA does follow the trends of other Stack Exchange sites. Also, people don't like to downvote on Retro. I think that's the biggest takeaway.

I think it could actually be something as simple as the age of the site , S.Q.A is newer than S.O and so people don't have a lot of reputation points to use on downvotes. A downvote is a no-brainer when you have 10s or 100s of thousands of reputation points but when you only have hundreds its not so appealing.

I have noticed a bit of an influx of users over the last week or so (although a lot of them are asking fairly basic and repeated questions) we should see a bit more growth and activity which should get the community going a bit more.

Not the answer you're looking for? Browse other questions tagged discussion down-votes .

Welcome!
This site is for discussion about Software Quality Assurance & Testing Stack Exchange. You must have an account there to participate.
Help
Visit chat

8
Unanswered questions - can we do something about them?
9
Display of informative message over SQA site
2
Housekeeping/Activity boosting activities
3
How do we get better at closing/reopening questions?
6
Why do my questions get downvoted?
6
Why not to let the community decide if the answer is correct?
4
Lowering the privileges threshold depending on popularity of site
6
Has deleted user been involved in voting fraud?